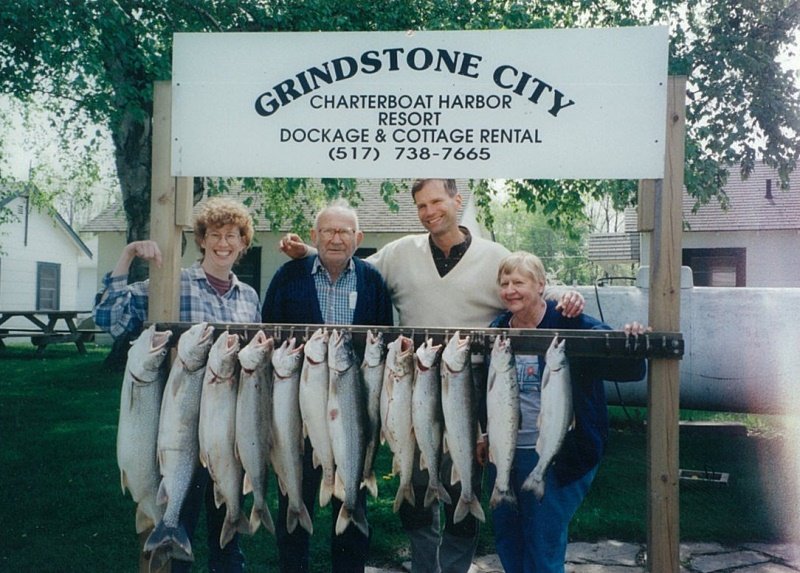 On one of our first dates, Dan told me of his dream to take his dad on a fishing trip.  Not just any fishing trip – but one on a charter boat where they have all the fancy equipment and cater to your every whim.

He’d had the dream for years.  When I asked him why he hadn’t done it, he said it cost too much.  He didn’t have enough money.

The next year Dan asked me to marry him.  But with all the preparations and expenses for the wedding, we put the dream off until after the wedding.

A year later, I quit my six-figure corporate job and we moved to Minnesota.  Our plan was to build a network marketing business full-time.   Again, we shelved the dream.  “Once we start really making money, then we’ll do it.”

A year later, however, our savings were gone and we were going into debt.  There was NO WAY we could go on this fishing trip now!

I then tried the most obvious solution to solve our “not enough” money program.   I tried to make MORE money.  First, by being hired to work for another coach.  Then I launched my own business, Access Abundance.

“If only we could pay down our debt, then we’d have more for this dream,” we told ourselves.  But no matter how hard we worked or how much money we made, we still didn’t have enough for the pricey fishing trip we dreamed of.

A few years later, we went back to Michigan for Christmas with Dan’s family.   That’s when I realized that Joe,  Dan’s dad,  was aging rapidly.   I mentioned it to Dan.

“If we’re serious about taking your dad on that trip, we better do it this year.  I don’t know how much longer he will physically be able to go.”

Suddenly, putting off the trip was not an option.  We committed to having our dream come true that summer.

Dan had had this dream for 10 years – maybe more.  But it never went past the dreaming stage because he didn’t have the money.   Only when we realized it was “now or never” did we finally take ACTION to have this dream come true.

Our first action was to learn more about charter fishing trips in the Great Lakes.  What happened is nothing short of amazing.

It is also one of the most powerful lessons in abundance I have ever experienced.

I found a guy named Captain Dan (was that a sign or what?) who ran his charter boat in Lake Huron.   This was our ideal – because it made for a short, easy drive for Dan’s parents.  (They lived near Detroit).

When I called Captain Dan to get details, he said he would take us out for two days of fishing.  He would provide the equipment, bait, food and beverages.   We’d have the boat to ourselves.   He would bait the hooks, take the fish off the hook and clean them for us when we got back ashore.  (Just the kind of service we wanted.)

And the total cost for BOTH days would $250.

Captain Dan continued, telling me of cabins for rent right next to his boat dock.  And the cost of two cabins for two nights would be a little more than $100.

He then said they also had a lakeshore restaurant.  And the chef would prepare our fish any way we wanted for dinner each night.

I was blown away.   I quickly calculated that this dream come true was going to cost $450-$500 – including gas for our drive to Michigan.

We had put off this dream for years because of money.  We thought MONEY was what was keeping us from this dream.  But it wasn’t money.  It was our lack of commitment, clarity and action.

Because as soon we decided it was “this year or never”, we took action.  That’s when we discovered that the beliefs we had about what it would take were wrong.  That the trip didn’t cost $3000 – not even close.

The next July, our dream came true. We had a marvelous time with his folks.  And, as you can see from the picture above, we also caught a TON of fish.  Some of our best memories of his mom and dad are from that trip.  And we are grateful for them.

Yet, had we taken action sooner, we would have had the option of taking more than one trip.   And we’d have even more fond memories.

We were clear on our dream.  We knew what we wanted.  But we stopped there.  Because we didn’t think it was possible, we didn’t take action.  We didn’t even get CLEAR on what it would take.   We jumped to conclusions.  We assumed.  And we never checked.

I see this happening with the women I work with all the time.   It’s understandable given the Archetype of Scarcity upon which our world has been built.   Scarcity is the premise – especially when it comes to money.

This belief in “not enough” is automatic and unchallenged.  It never occurs to us it may not be accurate.

So what about you, my friend?

Is there a dream you’re putting off and not in action for? Have you “made something up” about it like we did?  What action can you take to get more clarity?

Perhaps its the idea of getting clarity that overwhelms or paralyzes you.  If so, then focus on taking ONE step. Get ONE piece of clarity. And let go of any judgment you have.

As I’ve said for years, “when you don’t have clarity, you will experience scarcity.”

And you deserve to have ALL your dreams come true, my friend.